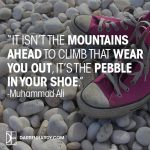 Running your own business feels like a steady jog uphill. There is no finish line (unless you retire or sell out I guess), only a view of the next mountain when you’ve reached the top. It’s been an enjoyable run so far, and I love what I do. This is the time of year when it’s traditional to count your blessings (for Thanksgiving, if you live in the US) and think about goals for the coming year. First, though, I need to sit down and shake some of the rocks and twigs out of my shoes that slowed me down and caused a few missteps this year.

I missed out on gaining a corporate client

That is, I missed out on corporate-client rates because I wasn’t paying attention. An acquaintance referred a friend of hers to me, saying she had been translating some materials for him as a favor but she didn’t have time for it anymore and she thought he needed a professional. I assumed it was an individual who just needed some personal papers translated, and because I was busy I said “sure” without asking any further questions. The client contacted me via a personal email and I gave him the rate I charge to private individuals and agencies.

Turns out he is a CEO and the work was for his company.

I suppose none of the parties involved here communicated very clearly, but since it’s my business the burden was clearly on me to ask more questions. Great client, great relationship, but I want to kick myself really hard every time I think about it. Fortunately there have only been a few projects so my shins aren’t too bruised.

One of my goals for the past few years has been to attend a translation conference, and this year the ATA conference was in San Francisco, only 4 hours from where I live. As fate would have it, though, I had been on the road almost constantly for family reasons during the months before and I was travel-weary. So I figured I would sign up for the Saturday only and make it a one-day trip.

Big mistake. Saturday was the last day of the conference, and there was definitely a tail-end feeling to the place that day. The vendors were supposed to stay until 2:00 p.m., but by the time I walked in at noon a good chunk had already packed up and left.

Also, because my mind had been on so many other things I had failed to prepare properly for the day by contacting people beforehand and setting up appointments to meet and say hi. The ATA had a fantastic app for just that purpose; you could find a fellow attendee and then connect via twitter, for instance, but I had just bought a new phone, had not installed twitter yet, and found out I couldn’t do it there because didn’t know my password by heart.  The people I did meet on the fly were all very nice, but clearly tired from days of networking and ready to go home.

I spent too much time on the wrong projects

This one is partly a matter of personal preference, so just humor me if you can’t relate at all. I’m starting to become leery of editing offers. I don’t like editing work to begin with, and since agencies have a pretty low ceiling for hourly rates I make much less on these kinds of jobs than I do translating (part of the reason why I like charging per word). Generally, I only take editing jobs if it’s a new client and I want to get in the door, or if it is a very good client and I don’t want to reject too many offers.

However, I’m starting to suspect that some agencies simply don’t want to pay my translation rates (anymore) and are trying to save money by having me edit the work of cheaper translators. On top of that, it seems like these types of jobs are becoming more and more complicated and time-consuming, with endless last-minute questions during my nighttime hours or being asked to re-enter my edits in the agency’s intranet software. It’s annoying, and a missed opportunity in the sense that I could have spent my time more productively on more enjoyable projects.

So these are some of my missteps this year. Is there anything you regret or would have done differently? In any case, I my shoes feel better now and I’m ready to start thinking about next year’s mountains.

2 thoughts on “Missteps and missed opportunities”